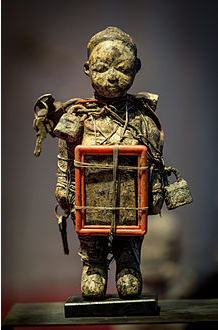 Where's Vodun Located in the Library? Vodun (a.k.a. Vodoun, Voudou, Voodoo, Sevi Lwa) is commonly called Voodoo (vû'dû) by the public. The name was derived from the god Vodun of the West African Yoruba people who lived in 18th and 19th century Dahomey. Its roots may go back 6,000 years in Africa.

Vodun is a religion of many traditions.  Each group follows a different spiritual path and reveres a slightly different pantheon of spirits.  In one of its major forms they are call Loa, which means “mystery” in the Fon language.

Dahomean traditional belief included a supreme being called Nana Buluku.  This androgynous being is remote and unknowable.  S/he generated Mawu-Lisa, who in turn, created the earth and all life forms.  Also, the other spirits come from her-him.

There are hundreds of minor spirits.