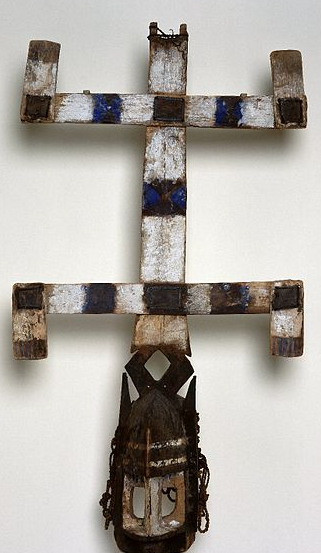 "Like other Dogon masks, kanaga masks are worn at rituals called dama, whose goal is to transport the souls of deceased family members away from the village and to enhance the prestige of the deceased and his descendants by magnificent masked performances and generous displays of hospitality"

Where's Dogon Located in the Library? "Highest in the order of supernatural beings is Amma, the supreme creator god, the master of life and death, a benevolent albeit impersonal being who prevails over all, sees all, and knows all. He is responsible for the creation of three other subordinate beings, the worship of which is the basis of several totemic cults. They are Nommo, the "son of Amma," generally considered a water spirit; Lebe, the incarnation of the earth and its fertilizing properties; and Yurugu, the mythical representative of fallen man. The Dogon also believe in various malevolent and benevolent spirits who populate the bush, trees, and uninhabited places.

Although the Dogon recognize the creator god Amma as the Supreme Being and address prayers and sacrifices to him, the core set of beliefs and practices focuses on ancestor worship. This is manifested through the cult of the masks, the Lebe cult, the Binu cult, and the more general cult of the ancestors associated with the ginna. The spread of Islam throughout Africa has brought about some degree of change in the basic religious orientation of the Dogon. Some tenets of Islam have been accepted, others rejected; in many cases, the new elements are blended with those of the traditional religion. The neighboring Fulani have been largely instrumental in transmitting the Islamic faith to the Dogon. About 10 percent of the Dogon are Christians."

From the Online Britannica Encyclopedia